Toronto, July 11, 2022—The Liaison of Independent Filmmakers of Toronto’s (LIFT) recently celebrated its 40th anniversary as an artist-run organization. The city has changed significantly over those four decades. This milestone presents the opportunity to create an intergenerational dialogue between artists. We are excited to announce “Transformations: A Cross Generational Commissioning Project,” a call for proposals from five emerging artists to collaborate with five artists who have been a part of LIFT in the past. Inspired by the Barbara Hammer and Gina Carducci film “Generations,” we hope to generate a series of five short collaborative works, exploring the passage of time in the built landscape and questioning alternative histories of Toronto. The theme is a broad question that will allow a variety of responses from our filmmakers: What defines a city in flux?

We can imagine many responses, but will focus on works that point towards the idea of filmmaking as a collaborative art, explorations of collective experience, and cultural memory; placemaking; intersectional storytelling; intergenerational exchange; and imagined or unexpected communities.

The proposals for the five emerging artists* will be adjudicated through a selected jury of members who represent the diverse culture that is LIFT’s membership. The jury will shortlist successful applications which demonstrate a clear artistic vision and alignment with the interests of the veteran filmmakers.The shortlist will be shared with the veteran artists who will provide feedback and LIFT staff will make
the final pairing.

*In this project, the term “emerging” is defined loosely and doesn’t have a defined age range nor skill level.If you feel like you could benefit creatively from a collaboration of this type, this project is for you.

– will be paid a commissioning fee of $2,000 per artist
– will receive a Production Level membership until the completion of the program in June 2023.
– will receive support for their production: each of the five collaborative films will receive $3,000 in cash for direct production costs, $5,000 in in-kind production equipment and facility rentals at LIFT, and $2,000 in technical support from third party vendors.
– will share 50/50 copyright of the final work with the collaborating artist.
– will receive a final screening fee for the finished work that is commensurate with standard Canadian Artists’ Representation/Le Front des artistes canadiens (CARFAC) and the Independent media Arts Alliance (IMAA) fees

The filmmakers will have the opportunity to make their films from October 2022 – April 2023 and be provided with in-kind production and post-production support from LIFT.

In May 2023, we will present the final projects on an online screening platform with the films available for on-demand screenings for a set period alongside pre-recorded artist interviews and artist statements. If COVID-19 gathering regulations allow, we will also host an in-person screening in Toronto concurrently with the online screening.

After reviewing the submission process below, submit your proposal via Google Forms:
https://forms.gle/Ur8jsG8tvj1xSxpE6 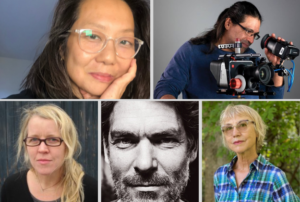 “Open to any genre, especially scripted (or hybrid) work. Brainstorming on an idea (whatever it is), working within our means and making the most of it, and the co-writing/co-directing collaborative aspect interest me most.”

Jorge Manzano was born in Santiago de Chile in 1968 and immigrated with his family to Canada following the military coup of 1973. In 1988 he began post-secondary studies at the University of Toronto, where he graduated with an Honours B.A. in Political Science and Cinema Studies. While a student, he realized his passion for filmmaking and began to explore his identity as a person of colour in Canadian society. In 1994, Jorge formed Nepantla Films. Nepantla is a Nahuatl word that describes the reality of living between various worlds and identities.

Jorge Manzano’s award winning films, “City of Dreams” and “Johnny Greyeyes” screened at the Sundance Film Festival in 1999 and 2000. His screenplay, “The Strike,” was a quarter finalist for the Academy Nicholl Fellowships in Screenwriting and was shortlisted for the Sundance Film Festival screenwriting lab and the Tribecca Institutes All Access Program. In 2017, Jorge won the TIFF-CBC Diverse Screenwriters Grant for his screenplay “The Strike.”

Kelly O’Brien is a mother and independent filmmaker living in Toronto. Her short diary films have screened internationally and online for NY Times Op-Docs. Her live documentary performance/family slideshow, “Postings From Home,” based on a decade’s worth of Facebook posts, has been featured at documentary festivals throughout Canada, including the Hot Docs Canadian International Documentary Festival in 2018. She’s currently adapting it into a feature film with the NFB. She received an MFA in film production at York University and is now, very slowly, pursuing a PhD in Environmental Studies at York University.

John Price is an independent filmmaker, photographer, diarist, and educator born in Fleming, New Jersey in 1967. He has lived in Canada since 1969. Price’s work features extensive experimentation with a wide range of motion picture film emulsions and camera formats. He frequently works with outdated stock, hand-processing his films to achieve quality and textures that would be impossible through commercial laboratories, adding a human element that becomes as important as the subject in communicating the subtext of his films. Primarily interested in humanist documentary films with a social conscience, his personal work is a celluloid diary of everyday life. He has produced 50+ films since 1986, which have been exhibited at numerous festivals, museums, and galleries internationally, including Museo Nacional Centro de Arte Reina Sofía, New York Film Festival, Berkeley Museum of Art and Pacific Film Archive, VideoEx, The Presidential Palace (Chile), Museum of Modern Art Buenos Aires, 25FPS Festival, International Film Festival Rotterdam, Berlinale, Edinburgh International Film Festival, CPH:DOX, Toronto International Film Festival.

Edie Steiner produces independent media art projects, which are exhibited in international film screenings, art galleries, and published in cultural texts. She holds a PhD in Environmental Studies (York University, 2015) and teaches arts-based practices in higher education and community programs. Her film “Borderland Memories” (2020), involved collaborations with artists and cultural scholars in Canada, the US, and Europe, and was funded by the Canada Council for the Arts. As a member of the 1980s experimental film collective, The Funnel, Edie produced Super 8mm films in performances with her original music. In the 1990s she served on the Board of Directors of the Liaison of Independent Filmmakers of Toronto while making short narrative films. Her films are available on her website.

“My films and themes I like to work with are usually around memory, places lived, landscapes and sites. I produce most of my own camera work and like to involve various types of media, from digital video to analogue media such as Super-8 and still photos. I like to work with other creators when possible, for visual effects, music, and sound elements.”

The Transformations: A Cross Generational Commissioning Project is made possible thanks to the generous support of the Canada Council for the Arts and their Digital Now Grant.

We encourage proposals from artists of every background, but strongly encourage Black, Indigenous, and People of Colour (BIPOC) artists to apply.

Past or current LIFT membership is not a factor or qualification for proposals.

Your Proposal Must Include:

2. Written Proposal in three sections:
i. Describe how you would interpret the theme of urban transformation and collaboration within a film project. Feel free to highlight general themes or focus on specific motifs. (maximum 500 words)
ii. Supply an Artist Statement about your past work and current artistic concerns. (maximum 500 words)
iii. Indicate which two veteran artists you wish to collaborate with, in order of preference, and a brief statement  about how your interests in the project align with the interests and ideas of your chosen veteran artist. (maximum 500 words)
iv. In addition, you have the option to send a video pitch in support of your submission. (maximum 2 minutes)

Submissions will be weighed on both the originality of your ideas and the room your process has for organic collaboration.

3. Where did you see, or how did you find out about, this call for proposals?

5. Visual support material of past work. (do not send originals, documentation will not be returned).
Accepted formats: URL links (preferred; include applicable passwords) or DVDs (NTSC)

Please Note:
1. Proposals will only be accepted from Canadian citizens and permanent residents living in the Greater Toronto and Hamilton Area (GTHA).
2. Applicants are not required to have been a past or current member of LIFT.
3. Please email LIFT at least 72 hours prior to the deadline if you have any questions about your eligibility.

Final artist pairings will be made by Thursday, September 15, 2022.

However, if you would prefer to apply via physical mail for accessibility purposes, please mail applications to: ***
LIFT Transformations Commission 2022
c/o Liaison of Independent Filmmakers of Toronto (LIFT)
1137 Dupont Street
Toronto, Ontario M6H 2A3
*** Must reach the LIFT office before the deadline

The Canada Council for the Arts is Canada’s public arts funder, with a mandate to “foster and promote the study and enjoyment of, and the production of works in, the arts.” https://canadacouncil.ca

The Liaison of Independent Filmmakers of Toronto (LIFT) is Canada’s foremost artist-run production and education organization dedicated to celebrating excellence in the moving image. LIFT exists to provide support and encouragement for independent filmmakers and artists through affordable access to production, post-production and exhibition equipment;
professional and creative development; workshops and courses; commissioning and exhibitions; artist residencies; and a variety of other services. LIFT is supported by its membership, Canada Council for the Arts, Ontario Arts Council, Ontario Trillium Foundation, Ontario Arts Foundation, the Government of Ontario and the Toronto Arts Council.
https://lift.ca