Recipients of the 2022 Production and Post-Production Support Grant

After a five year hiatus the Liaison of Independent Filmmakers of Toronto’s (LIFT) Production and Post-Production Support Grant is back. Between 2005 – 2015, LIFT’s Support Grant annually provided $2,000 in equipment credits per filmmaker for eight projects at varying levels of completion (a $16,000 a year commitment).

Thank you to our jury which included filmmakers and former Support Grant recipients, Richard B. Pierre and Eva Kolcze, as well as TIFF Industry Programmer Jane Kim, were able to thoughtfully consider all the projects this year.

The artists and their respective projects are as follows:

LIFT was able to expand the Support Grant this year to include a cash award thanks to donations made in the memory of Mara Da Costa Reis. Mara was a young actor, writer and filmmaker who unexpectedly passed away in February 2021, just a few short weeks ahead of directing her first film project “Sprout.”

As her mother, Helga Marinzel explained to us last year:
“Mara was a creative being, who loved the magic of life, art and nature. As a child, Mara demonstrated a unique gift of connecting with plants, animals and people: an ability she embodied into adulthood. Mara expressed her vision and relationship to the invisible as an actor, writer and filmmaker. Mara saw film as a vehicle that can express the ineffable power of images through a symbiosis of the camera’s magnetism and the inner sensibility of a human being. She was intrinsically aware of the complexity that can be transmitted through the ability of film to use images and dialogues to reveal the layered, the secret and the hidden. Mara was attuned to the pulse of the music of Mother Earth and was preparing to make a film called ‘Sprout’ to share her experience of nature’s power.”

Our aim was to select projects that reflect Mara’s unique creative vision and independent spirit as an artist. We hope that these eight films are indicative of that spirit. If you are interested in making a donation in the memory of Mara you can learn more at our Donate page: https://lift.ca/donate-in-support-of-contemporary-film

Bonnie Whitehall is a multidisciplinary artist, educator and web designer working at the intersections of feminist ethics, activism and the humanities. She/her focuses on social inequities, space colonization, vulnerable ecosystems and dismantling colonial forms of ‘knowledge’ by using her art as a means of social commentary and political activism. Whitehall recently completed her MFA in Documentary Media at Toronto Metropolitan University (2021) and is in production on a short film shooting on 16mm as well as writing her first feature documentary script treatment.

Camil Ghajary is an emerging visual artist and filmmaker based in the GTA. Her first independent short documentary “When We Leave” was filmed in Iran and explores the intersections of immigration, socioeconomic inequality and family in Iranian society. She finds inspiration in stories about war, immigration, and revolution. Her upcoming film “Khastegari” is the story of a young Iranian woman who is faced with the difficult decision of betraying her sister in exchange for a better life in Canada.

Emily Ryder is passionate about telling stories that explore queer becoming, womanhood, and the complexity of intergenerational relationships. Her work has enjoyed screenings at festivals across North America and Europe, and has garnered recognition from institutions like the UN Women USA GCC, the Canadian Society of Cinematographers, Cinema Audio Society, and the Canadian Cinema Editors Association. Looking ahead, Emily hopes to continue to develop her creative voice within the landscape of contemporary Canadian cinema, and when it’s not her turn to speak, she hopes to use her diverse skillset to amplify the voices of those creating art around her. https://emilyryder.ca

With 8 years of professional industry filmmaking experience, Japinder Sandhu has created documentaries and films for Ontario College of Teachers, Federal NDP, and more. Japinder’s passion for culture, art, and discovery serve as a driving force for his passion to tell stories through different mediums. With a background in computer science and AI, Japinder is able to combine art and technology to create innovative storytelling.

Joanna Decc is an actor, writer, and filmmaker based in Tkaronto. As a filmmaker she is interested in the mundane, and overlooked, as well as nuances of the human experience. Her work tends to centre on the darker elements of human existence, often encompassing a melancholic stain. She enjoys working with a variety of mediums, with a particular interest and passion for analog film. https://joannadecc.com

Oyin Olalekan is a writer, producer, and publicist based in Toronto. As the Programs Manager at POV Film she designs programming for QBIPOC filmmakers, and champions emerging stories from diverse communities. She has been responsible for the marketing strategy (traditional and online), for premiere screening events across Canada and the United States, and curated programming at the DOC Institute. In 2020 she designed publicity campaigns for cutsleeve and their EP “The Parts We Could Not Abandon.” She is a Winter Tangerine writing fellow and alumnus of the Beats + Intentions 2020 Playwright Unit. She is the director of the short film “Sunday is for Lovers,” and with two feature films in development, she is always reaching for the next story to tell. She holds an M.A. in Media Production from Ryerson University.

Rolla Tahir is a filmmaker and director of photography based in Toronto. She’s lensed short, narrative and experimental films, which screened across Canada and internationally, including the UK, Germany, the States and Guatemala. Obsessed with the durability, longevity and spontaneity of the analog film medium, Rolla has worked with Super 8mm, 16mm and 35mm to explore the analog process and its possibilities. Her work often returns to themes of belonging, transience and the unknown as they pertain to those existing in liminal and interstitial spaces. Rolla’s first short film “Sira” was selected to screen at the 43rd Toronto International Film Festival, her latest film “a’hwa,” a short doc-hybrid, is screening at Breakthroughs Film Festival in June 2022. https://www.smokingapples.ca 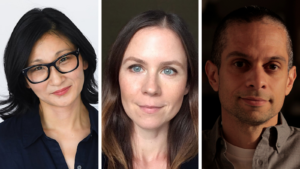 Eva Kolcze is a Toronto-based artist who creates films and installations that investigate themes of landscape, architecture, and the body. Her work has screened at venues and festivals including the National Gallery of Canada, Musée d’art contemporain de Montréal (MAC), MOCA Toronto, the Gardiner Museum, Nuit Blanche, Cinémathèque québécoise, Birch Contemporary, and the Images Festival. She holds a Bachelor of Fine Arts from OCAD University and a Master of Fine Arts from York University. https://www.evakolcze.com

Richard B. Pierre is an award-winning multiracial Black filmmaker who has written and directed over a dozen shorts that have been broadcast globally and screened in festivals worldwide. His work tackles a range of genres and subject matter; most recently focusing on race. His first documentary “What Are You?” was nominated for a 2020 Golden Sheaf Award and premiered on TVO. His latest fiction short “An Uninvited Guest” funded by the Ontario Arts Council won Best Thriller at the 2020 HollyShorts Film Festival, was nominated for a 2021 Golden Sheaf Award, and was broadcast nationally on CBC. His one-hour documentary on the 1992 Yonge Street uprising aired this past May on Citytv. https://www.richardbpierre.com